I don't want to vote for Obama (for the wrong reasons)

I know that I have an emotional response to our current president, and I don't want to vote against the Republican party just because I've been disappointed in Bush.  There are some issues on which I strongly agree with the Republican party.  But just some.

I don't want to vote for Obama just because I need change.  That'd be an emotional response.

I fired up glass booth.  I don't put much stock in online quizes.  And I won't base my decision on what glass booth tells me.

Their quiz is refreshingly simple.  Narrow the issues down to the ones I care about the most, and then see which candidates agree with me the most on those few high-priority issues.

I still have more research to do.  But I'll take a little comfort in the fact that this quiz (among others) jibes with my inclination. 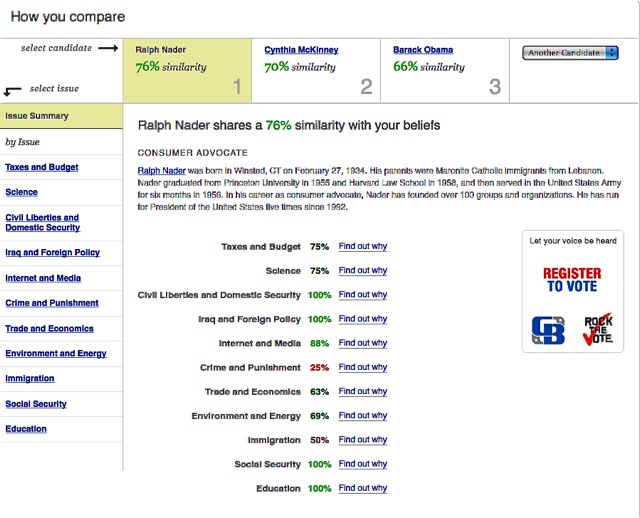 I had already mailed in my absentee ballot before taking this quiz. Like you, (Trippy and) I shall take some comfort in knowing that I (we) voted based on principles and beliefs, as opposed to responding with a reactionary "vote for change."
← Analysis Result: Dumb and likes erotica.
dblume the teacher →